A Response to Gary Varvel 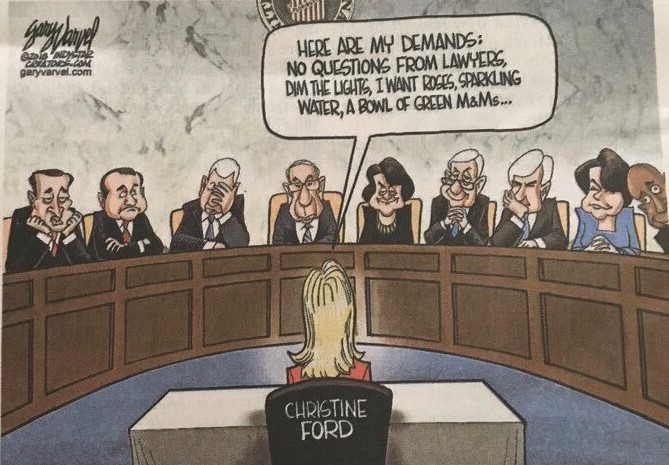 The above cartoon by Gary Varvel appeared in the September 23rd edition of the Indianapolis Star.  I’ve taken the liberty of posting my response here. Please share widely.

When I was a kid, I read books about men coming to the rescue of women, and for years believed that was the proper pattern, until my wife informed me women were quite capable of rescuing themselves, thank you very much, and if she wanted my help she would ask for it.

When I was asked to respond to Gary Varvel’s cartoon dismissing sexual assault, my first thought was, “A woman should speak to that issue, not a man.”  Then it occurred to me that men created this misogynistic mess we’re in and therefore share an obligation to right this grievous wrong.

I’m not writing this as a husband, brother, or grandfather. The women with whom I am related have value apart from their relationship to me. I write as a human, as a Quaker, as a pastor, who can’t count the times women have confided their stories of abuse to me, often decades after the fact. One, a woman in her 70’s, wept while telling me of an assault that had happened 60 years before at the hands of an uncle. When she told her parents, they ordered her to never speak of it again. Her trust shattered, she never married, while her uncle became a venerated man in their community. When he died, she was placed in charge of his funeral dinner, since, as her family told her, “you have the time since you’re not married.”

Let’s imagine she had shared her story in later years. Man after man would have wondered why she hadn’t spoken sooner. “That happened a long time ago,” they would have told her. But it wasn’t long ago for her. It felt like yesterday, like just a moment ago, so deep is the wound, so fresh the pain. Her abuser might well have forgotten this one vicious act in a life of vicious acts, but she never forgot. It was relived with every sexist remark, with every newspaper report of assault, with every unwelcomed, unasked for, touch. It was relived every time Donald Trump said Brett Kavanaugh is a good man. It was relived every time someone said “boys will be boys,” or “every man does that.” It was relived every time a cartoonist debased a courageous woman for a handful of laughs from persons whose character is so skewed I cannot imagine why anyone would want their approval.

I’ve known Gary Varvel most of my life. We were raised in the same small town and have many friends in common. We embraced the Christian faith around the same time. I once believed as he still does. But his faith has taken him places I cannot go, embracing causes I cannot support. To be fair, he likely says the same thing about my faith. Gary has often said his faith informs everything he does. I believe him, which is why I reject his faith, or at least his version of Christianity, which always comes at the expense of others, be they women, or gays, or liberals, or any “others” whose demands for justice challenge its narrow and settled world.

I have never wanted anyone to lose his or her job. It has happened to me twice, and each time was painful and difficult. While I have never wanted anyone to be fired, I have often wished those who neglect the hard work of self-awareness and self-improvement would retire, or perhaps find another line of work that doesn’t involve shaping, or misshaping, public opinion. That is my wish for Gary, to retire and spend time learning the world his wife, daughter, and granddaughters inhabit, a world far different from his own.